Win money on DrumbeatNews !!!
Lagos-based MFM FC ace striker, Stephen Odey, currently roped in a transfer saga in Denmark, was reportedly tricked into that country according to the club’s Media Officer, Olawale Quadri. 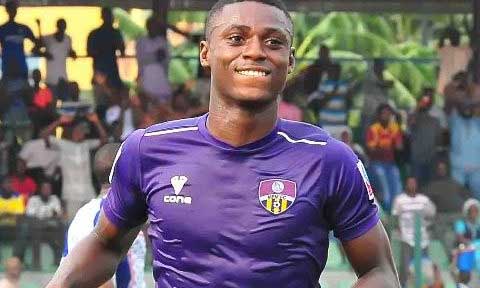 Quadri told the News Agency of Nigeria (NAN) in Lagos said that the player claimed he was only invited for a facility tour with FC Midtjylland, Denmark until another move was introduced to him.

AOIFootball.com on Friday reported that Odey, who is currently the top scorer in the Nigerian Professional Football League (NPFL), had planned to move to FC Midtjylland, but that went south “due to age falsification.”

It said that the age Odey presented in his passport was totally different from what was on his certificate.

“The Danish club have asked Odey to leave their Sports Complex immediately due to the development,”AOI said.

The Danish club also out of anger almost ensured the cancellation of the remaining days on his visa but it took the intervention of an highly respected figure ‘ in the club’ to wage in thus the club had to slow down on that decision.

NAN reports that MFM management had declared the 19-year old Odey Absent Without Leave (AWOL) after the player was missing in the team’s camp.

Quadri said that immaturity on the side of Odey made him to accept to travel to Denmark without seeking proper clearance and permission from the club.