Nigerians on social media have reacted to the photos of Ifeanyi Adeleke shared by his father, Davido.

This comes after the singer, via his Instagram, shared a cute photo of his son, Ifeanyi declaring him the sole heir of his empire.

Sharing a cute photo of his son by his 4th babymama, Davido wrote; ‘HEIR APPARENT’ 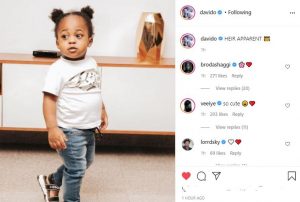 Reacting to the photo,

@lilsteveofficial wrote;’This is not the comment you’re looking for , just keep scrolling.

@lovren_empire- ‘So this little Ifeanyi is richer than me’

@barbiediva_20 wrote; ‘You want chi back’

@alisonraesexi wrote; ‘i want to have a, boyfriend,,,,but nobody cares’

@amebo9ja_ wrote “To the throne”

@heiskester_david wrote “The heir to the empire”

@keswise_ wrote “the next OBO”

@rozay_955 wrote “He use belle resemble him papa”

Davido Caught Scolding His Daughter, Hailey, For Trying to Twerk at Her Birthday Party