The Trump administration on Tuesday will begin the execution of the first federal prison inmate in 17 years after the Supreme Court reversed lower courts rulings and ruled federal executions could proceed.

Daniel Lewis Lee, convicted in Arkansas of the 1996 killings of gun dealer William Mueller, his wife, Nancy, and her 8-year-old daughter, Sarah Powellhad been scheduled to receive a lethal dose of the powerful sedative pentobarbital on Monday but a court order by U.S. District Judge Tanya Chutkan prevented Lee’s execution. 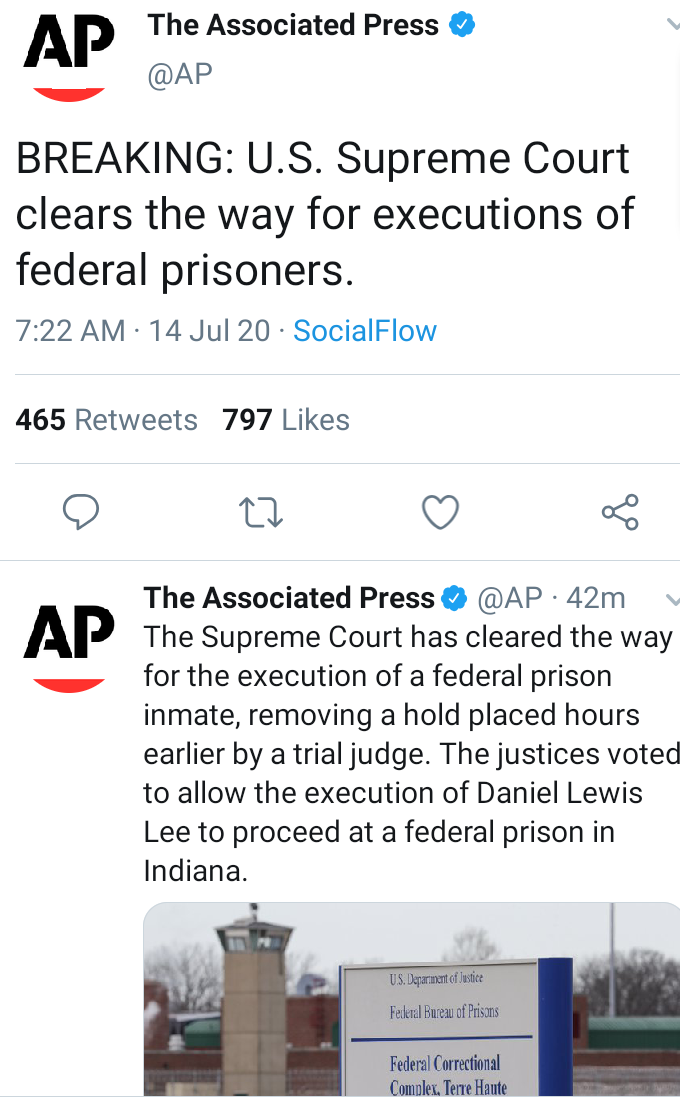 The administration wanted to step in, but a federal appeals court in Washington refused, forcing the Supreme Court to step in, with a contentious a 5-4 vote, as 5 conservative judges voted in favour while four voted against the execution.

Some members of the victims’ family argued in court proceedings they would be put at high risk of contracting Coronavirus if they had to travel to attend the execution, and sought to delay the execution until it was safer to travel. Those claims were at first granted but also eventually overturned by the Supreme Court.

The supreme court in an unsigned opinion said that the prisoners’ “executions may proceed as planned,” with Lee’s execution scheduled for about 4 a.m. EDT Tuesday, according to court papers.

Lee, of Yukon, Oklahoma, has had access to social visitors, visited with his spiritual adviser and has been allowed to receive mail, prison officials said and during his execution he will have three witnesses three family members, his lawyers and spiritual adviser present.

“The government has been trying to plow forward with these executions despite many unanswered questions about the legality of its new execution protocol,” said Shawn Nolan to the Associated Press.

Shawn is one of the attorneys for the men facing federal execution.

What! Indian man caught having sex with street kid in public

WHO Suspends Chloroquine Trial As Possible Cure For Covid-19