President Trump suggested Iran’s downing of a U.S. military drone was unintentional and triggered by someone “loose and stupid,” providing at least momentary relief from the potential threat of a military confrontation in the Persian Gulf.

The drone’s shootdown is the latest in a series of incidents across the Middle East that has stoked fears of a wider military conflict.

“I find it hard to believe that it was intentional,” Mr. Trump said about the drone while speaking to reporters at the White House on Thursday.

His comments added a note of uncertainty about the administration’s reaction to the incident. Officials have briefed lawmakers and planned meetings for top congressional leaders this afternoon at the White House. 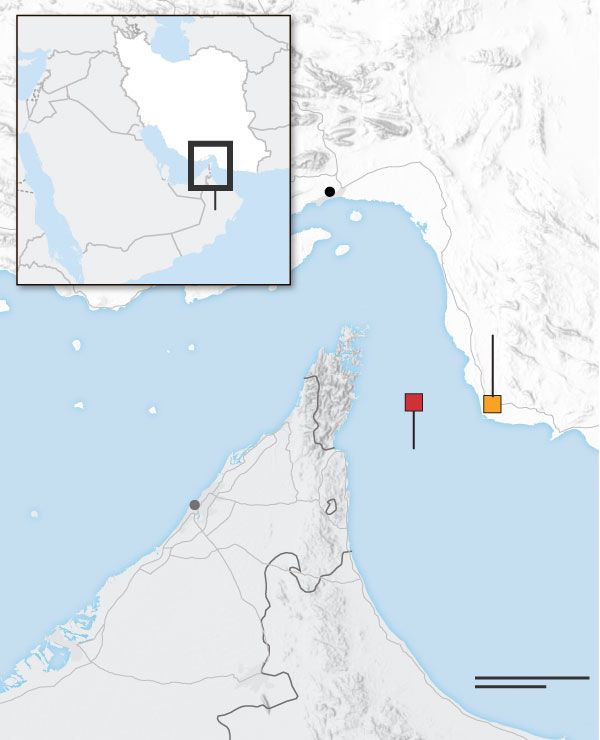 YELLOW POINT: Where Iran says drone was shot down

RED POINT : Where U.S. says drone was shot down

Mr. Trump tweeted earlier in the day that Iran had made a “very big mistake,” raising the possibility that the U.S. may respond. But Mr. Trump’s comments later indicated he believes it is possible it was an error, while adding that he still didn’t have all the facts.

“This is a new fly in the ointment,” he said in the later comments. “This country will not stand for it.”

Less than a week after the U.S. accused Iran of attacking tankers, the Islamic Revolutionary Guard Corps said its air force brought down an American surveillance drone in a southern coastal region along the Strait of Hormuz. The IRGC said the drone had violated its airspace and crashed into Iranian waters.

The American military confirmed that an Iranian surface-to-air missile shot down an unmanned drone, but denied the aircraft was in Iranian airspace.

“Iranian reports that this aircraft was shot down over Iran are categorically false,” said Air Force Lt. Gen. Joseph Guastella, a top U.S. military commander in the Middle East. He said the aircraft had been flying at high altitude about 34 kilometers—or more than 18 nautical miles—from the nearest point of land on the Iranian coast.

The surveillance drone was flying in an area near where ships had been attacked, Gen. Guastella said. “This attack is an attempt to disrupt our ability to monitor the area following recent threats to international shipping and free flow of commerce,” he said.

Whether the drone was struck in international airspace or over Iran’s territory will matter in the court of world opinion.

State aircraft may not overfly the territory of another country without permission and shouldn’t endanger civilian aircraft, according to the International Civil Aviation Organization, a United Nations agency better known as ICAO. The international border for aircraft matches the maritime border of 12 nautical miles, according to ICAO.

In a tweet, Iran’s foreign minister, Javad Zarif, said the U.S. was lying about the location of the aircraft and would make its case to the U.N. “We don’t seek war, but will zealously defend our skies, land & waters,” Mr. Zarif wrote. He later tweeted that Iran had retrieved parts of the wreckage of the U.S. drone inside Iranian sovereign waters.

A U.S. official, responding to Mr. Zarif’s comments, said the drone was operating in international waters and was shot down by an Iranian missile system. The official added that the drone was working “to help ensure freedom of navigation in response to unprovoked attacks against commercial vessels.”

Manufactured by U.S.-based Northrop Grumman Corp. , the RQ-4A Global Hawk can fly for over 30 hours at a time and has a wingspan of about 130 feet—slightly wider than a Boeing 737 jet. Its price tag is $130 million, not counting research and development costs.

On a possible response to the incident, Mr. Trump reiterated that “Iran made a big mistake,” but said that “you’ll find out” how he intends to respond.

The drone’s downing was the latest volley in an increasing number of confrontations between Iran and the U.S. and its allies. Oil prices rose sharply after news of the drone attack.

The U.S. has been rapidly expanding its military presence in the region in response to what it says is hostile behavior from Iran. The Middle East country has chafed under American sanctions since Mr. Trump withdrew from an international deal to open Iran’s economy in exchange for limits on its nuclear program.

Squeezed financially and cut off from global markets, Iran is trying to make the U.S. pressure campaign as costly as possible for Washington without provoking an outright war, analysts say.

Iran’s behavior is “fully calibrated,” said Ariane Tabatabai, an Iran expert and associate political scientist at the Rand Corporation. “The Iranians are intentionally and meticulously escalating,” she said, in the hope of getting the U.S. to dial down pressure or strengthen its own hand in future negotiations.

On Thursday morning, the Iran-aligned Houthi rebels in Yemen claimed responsibility for firing a missile that struck a desalination plant in Saudi Arabia, a U.S. ally. The spokesman for the Saudi-led military coalition fighting in Yemen, Col. Turki al-Maliki, called the attack an act of terrorism.

Fights Breaks Out On Flight to London , Causes Emergency Landing