Win money on DrumbeatNews !!!
A Nigerian professional football manager, Ndubuisi Emmanuel Egbo has made history after becoming the first African coach to win a title with an European side.
The former Super Eagles goalie helped his club Tirana to win the 2019/20 Albania League title in a remarkable style.
Egbo and his wards are also in the final of the Albania Cup and this could be another landmark achievement for the 46-year-old if his side should win it.
Tirana fans are all in joyous momentum with this latest achievement which they have been looking for since the past 11 years.
The result means Tirana currently on 69 points are now seven points ahead of Kukesi who are on 62 points with two games left to play.
Another big record for Ndubuisi Egbo is that his club will be playing in the Champions League next season and he is the first African to qualify a club for the prestigious competition.
Egbo started his football career with defunct Nitel FC of Enugu and was among the Super Eagles stars who campaigned at the 2000 and 2002 African Nations Cup.

He is the first Black and first African coach to qualify a team to the UEFA Champions League. About time, Black coaches got more opportunities. 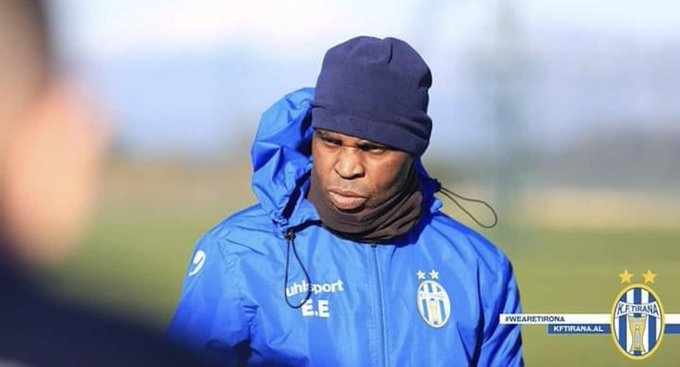 UCL: Cristiano Ronaldo Sets Another Record After Win Against Valencia