Formula One racing icon, Lewis Hamilton will not be involved in this weekend’s Sakhir Grand Prix in Bahrain after testing positive for Covid-19.

Hamilton, who has already been crowned Formula one world champion for the season, won the Bahrain Grand Prix on Sunday and it has now been announced that Hamilton woke up on Monday with mild symptoms after testing positive.

Formula One also announced that the Sports company will be tracking a contact Hamilton made prior to Hamilton’s arrival in Bahrain.

Hamilton, who drives for Mercedes, is now isolating in accordance with Covid-19 protocols and public health guidelines in Bahrain. 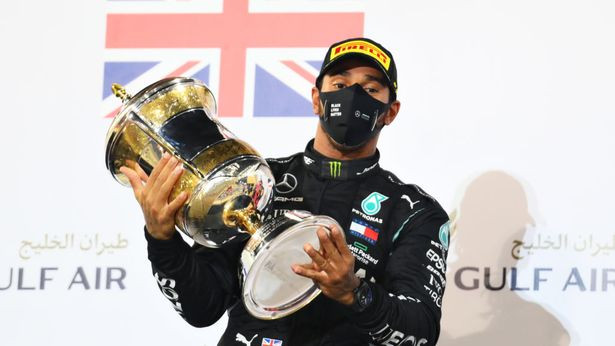 A Mercedes statement read: “Lewis was tested three times last week and returned a negative result each time, the last of which was on Sunday afternoon at the Bahrain International Circuit as part of the standard race weekend testing programme.

“However, he woke up on Monday morning with mild symptoms and was informaed at the same time that a contact prior to arrival in Bahrain had subsequently tested positive.

“Lewis therefore took a further test and returned a positive result. This has since been confirmed by a retest.”

Hamilton is the third F1 driver to test positive for Covid-19 this season, following Sergio Perez at Silverstone and Lance Stroll in Germany.

He also remains a doubt for the final race of the season in Abu Dhabi, set for December 13, as he will need to return a negative test before he races .