Paris Saint-Germain (PSG) have become the latest victim of the “Drake Curse” as they suffered the heaviest league defeat in 19 years. The Parisians lost 5-1 to Lille in a Ligue 1 thriller on Sunday after Layvin Kurzawa had posed for a picture with the Canadian rapper earlier last week.

Paris fans feared the worst when Kurzawa’s snap alongside Drake emerged on social media before the game.

It has been an ominous sign for Arsenal and Manchester City recently as both club lost crucial games after their stars were pictured alongside the Canadian artist.

The Gunners suffered a massive blow to their top four hopes with a 1-0 defeat at Everton days after Pierre-Emerick Aubameyang was seen partying with Drakefollowing his concert at the O2.

And Manchester City’s Sergio Aguero saw his penalty saved by Hugo Lloris in the 1-0 Champions League loss to Tottenham not long after taking a selfie with the rapper.

Kurzawa should have learnt from their mistakes – but he didn’t. The Paris defender posed for a photo with Drake earlier last week. 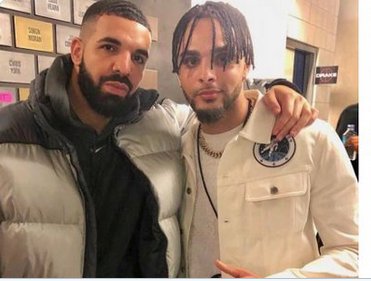 Apparently the curse of rapper @Drake strikes again – he took a picture with PSG’s Layvin Kurzawa earlier this week.

But they had not been beaten by such a margin since 2000, when they conceded five goals against Sedan.

It was a dreadful match for Paris as Thomas Meunier’s own goal put Lille 1-0 up just seven minutes in the game.

I Am Under Pressure At Manchester City – Guardiola