Primary School Pupil Looses His Teeth After Teacher Pushed Him Down From A Desk (Photos) - nigeria gossip, nigeria news

Win money on DrumbeatNews !!!
A Facebook user identified as Eze Doreen, has taken to the social networking platform to berate a teacher who allegedly injured a 4-year-old pupil after reportedly pushing him down from his desk.
The eyewitness revealed further that after the incident which led to the boy loosing his teeth, the teacher never bothered to notify his parents or the school authorities in order to administer first aid to him.
It was gathered that the young boy was reportedly left in pains till he went home with the injury. The two teachers handling the boy’s class have now been suspended by the school authorities.
Doreen narrated the full story and wrote;
***************
“Some teacher are extremely wicked, heartless but money conscious. This kid of 4 years was pushed down by his teacher from a desk by 11:00am yesterday she never cared to call the child’s parents nor report to the school authority for at least, the child to be given a first aid, she left the child in pains and went home.
“The child was in pain till 4:00pm when his mother came to pick him and his elder siblings.
“What do you think should be the punishment for such a wicked teacher?” 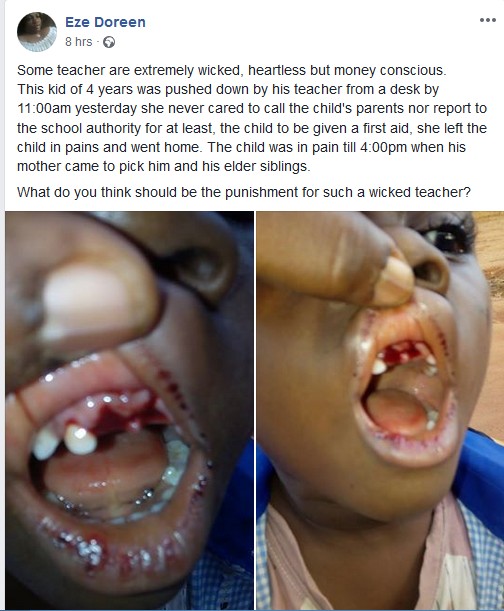 Omo-Agege Reveals Who Will Decide Nigeria’s Next Senate President

Falana Reacts To Denial Of Court Invasion By DSS