Recall that Justice AI Chikere of the Federal High Court in Abuja who presided over the Lance Corporal’s case, had ruled that it was unlawful for the army who are detaining Idakpini for criticizing the COAS from seeing his lawyer and family.

Tope Akinyode has however now accused Buratai and the Attorney General of the Federation, Abubakar Malami of disobeying the court order which granted the soldier access to his lawyer and his family. He added that disobedience to court order by the military is a COUP D’ETAT on Nigeria’s democracy.

Justice AI Chikere agreed with me that at any rate, it is a continuous breach of the detained Soldier’s fundamental human rights to be denied access to his lawyer and family.

So the Court ordered the Respondents- the Chief of Army Staff and the Attorney General of the Federation to give way and allow Lance Corporal Martins access to his lawyer and wife.

After 3 attempts, Buhari’s appointees, Brutai and the AGF have brazenly disobeyed the valid order of the Federal High Court.

Last week Wednesday, after the 2nd attempt to see Lance Corporal Martins failed, I placed a phone call through to the AGF to inform him of the development.

The AGF, Malami SAN told me that he has seen the court order I served on him and has minuted on it for action. That the public holiday could affect compliance but I should check back with him after the holiday.

I reached the AGF yesterday and told him I’ll be visiting the Army headquarters to ensure compliance, but again, I was rebuffed on the 3rd attempt to see Lance Corporal Martins.

There’s clearly no doubt that Buhari lacks respect for court orders and the rule of law and this shameful and pathetic occurrence is being embraced by his appointees.

Brutai is actively taking steps to return Nigeria to the dark era of military jaunta. This must stop! 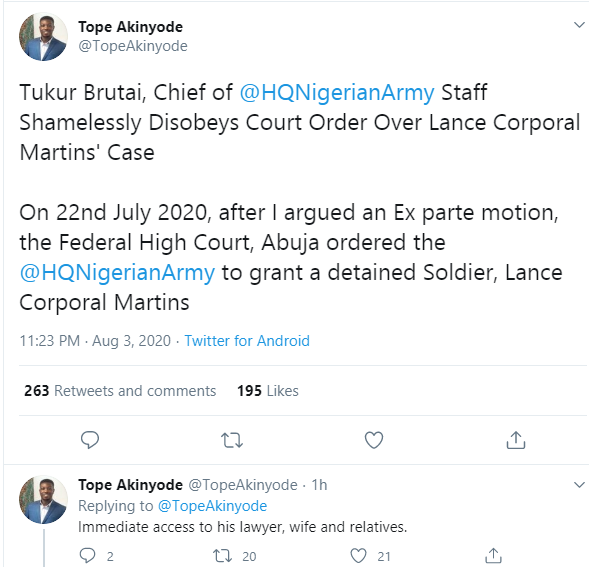