Super Falcons of Nigeria and FC Barcelona player, Asisat Oshoala has taken to Twitter to react after discovering that five Nigerian officials didn’t vote for her to win the CAF Award which she eventually won without their votes.

At the CAF Player of the Year Awards, which took place on Tuesday night in Egypt, the 25-year-old was crowned Africa’s best female footballer for the year for the 4th time after previously winning it in 2014, 2016 and 2017.

She beat Ajara Nchout of Cameroon and Thembi Kgatlana of South Africa to win the award.

In one of the voting documents released by the Confederation of African Football, it was revealed that five Nigerians officials including four-time African Women’s of the year footballer, Perpetua Nkwocha failed to vote for Asisat Oshoala for the top price.

Reacting on Twitter, she wrote: ‘It only made the victory more sweet …..CHILD OF THE CONTINENT. It’s a blessing to know how much lives I’ve touched and inspired across AFRICA in my young age. All love from this side.’ 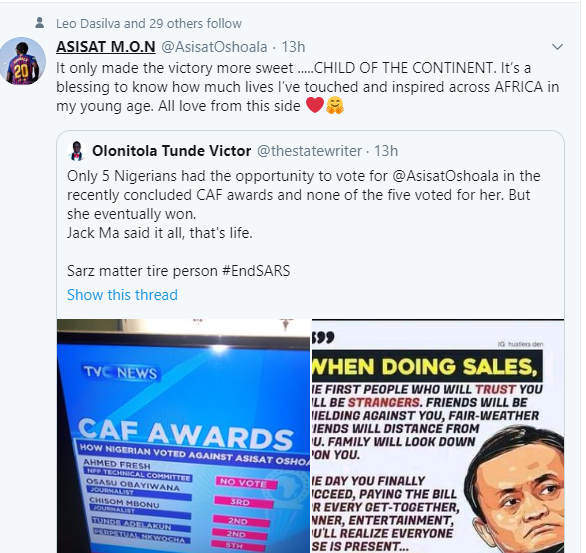 Mother Of Three Arrested After Staging Her Own Kidnap With Boyfriend

Pregnant teenager and husband reveal why they went into robbery