Burna Boy took to Twitter to give an insight into his journey to stardom as he restated that he is the best after Nigerian music legend, Fela.

The singer disclosed that he stopped caring about being the best after Timaya told him that “the world can do without the best”.

When asked where he was when afrobeat was “crawling” between 2010-2018, Burna Boy affirmed that nobody paved the way for him. He added that Nigerian singers were begging and paying the western world for their songs to be heard before he brought Africans the respect they now have. 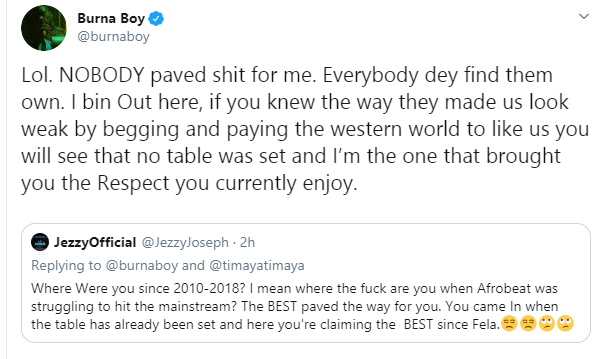 US To Restrict Foreign Students To 2-Year Courses

World Angelica Botu - September 25, 2020
0
A proposed government policy in the United States is seeking to restrict foreign students, including Nigerians to be admitted into US universities for not...

BBNaija: Khafi Reacts As Seyi Nominate Her For Eviction

Tiwa Savage Says She Has Never Seen Game Of Thrones