A Twitter influencer has sparked outrage after she was filmed enticing a child beggar with a bottle of drink only to leave her hanging.

In the video, the influencer known as Motara is seen driving in traffic when a child beggar walks up to her window to beg.

Motara motions with her bottle of drink, asking if the child wants to drink and she nods. With the window still up, Motara places the mouth of the bottle near the girl’s mouth.

As the cars start moving, the girl runs after Motara’s car, hoping for the drink, but the Twitter influencer continues to use the drink to raise her hopes without actually giving the child the drink.

She ends up laughing at the child before gulping down the drink and driving off.

Motara shared the video on her WhatsApp status then took it down, but it had already been captured by others and it went viral.

After she was called out, she issued an apology on Twitter.

Her apology reads: “I made the video yesterday cause stupidly I thought it was funny.
I went ahead to foolishly post it on my whatsapp story and immediately I did a lot of people called me out on my stupidity and I deleted it cos I realized that my actions were extreme.

“I’m sorry for mocking the girl and no amount of money I would have given her would have justified what I actually did. I realized that yesterday and it has resonated again today. Sorry doesn’t fix anything but I hope it can somehow lessen the blows of my stupidity.” 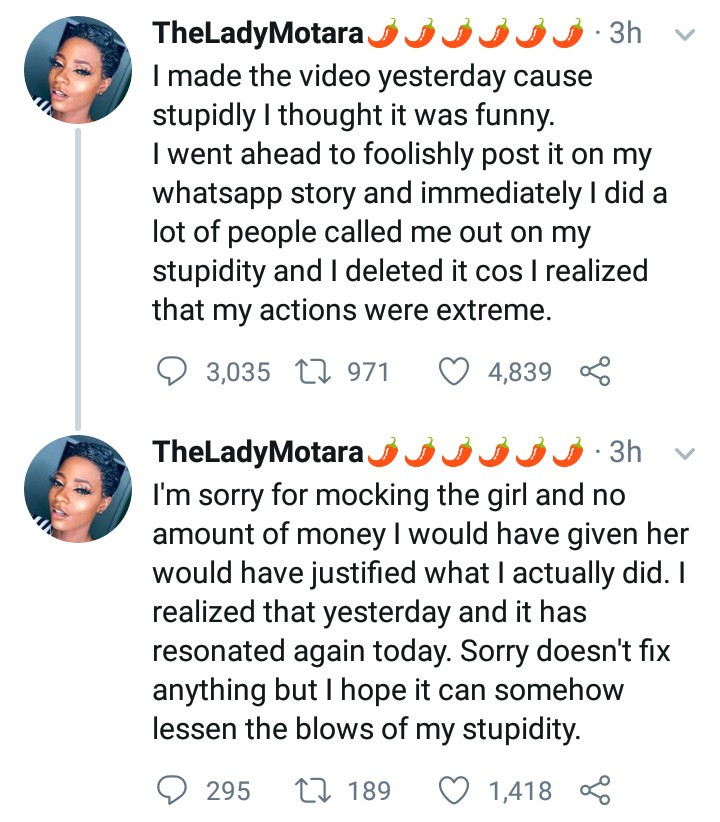